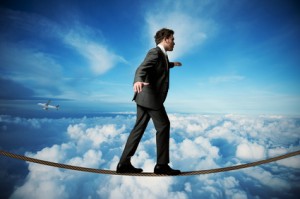 Taking risks of any kind is uncomfortable for many people. So it’s not surprising that communication risks can feel as uncomfortable as taking dangerous physical risks. Speaking a foreign language, adapting to understanding different accents and styles of speaking, not knowing what is appropriate to say and what is taboo — all this can cause you to feel as if you are an incompetent communicator. However, effective intercultural communicators know that discomfort and incompetence go with the territory. They accept that the road to learning to communicate interculturally feels like walking on a tight rope and so they keep the communication channels open in spite of their discomfort.

They do not keep a who-should-adapt-to-who-first score card. Instead, they practice adapting within any situation, with anyone from any culture. They adapt how they speak, how they listen, their customs, even their values. They are not always successful at adapting but they do not expect to be. They simply keep practicing every chance they get, like athletes who know that the only way to master something is to never stop practicing.

By listening with intercultural ears I mean that effective intercultural communicators have an ability to listen impartially. They set aside cultural preconceptions about what is the “right” or “wrong” way of asking, offering, promising, declaring or expressing an opinion. Instead, they ignore the outward form and listen for the content of what is being said or written.

Regardless of who they are communicating with and in what situation, the best intercultural communicators operate out of a heartfelt desire to build a bridge to their listeners. They are always open to meeting the concerns of others, which is a habit that has an emotional component that crosses cultures. Everyone is appreciative when others take their concerns into account. We know that not all of our concerns can be met but we appreciate interacting with someone who is sincerely dedicated to meeting those concerns. Such an individual builds communication bridges, in contrast with those who erect communication barriers.

5. They build their intercultural identity.

Our identity lives in language, more than we realize. Identity is formed by the opinions that we constantly exchange with others, which include our opinions of ourselves. Effective intercultural communicators actively articulate the identity that they want to build within their intercultural business context.

Within our native cultures there are many ways that we can promote ourselves: through titles, diplomas, testimonials from others who are considered influential, and so on. However, outside our own culture many of those symbols of our professional identity are meaningless. So effective intercultural communicators use every opportunity when writing and speaking to give others a clear and concise understanding about who they are, what they are capable of, what they care about and how that is a benefit to others.

7. They have intercultural wisdom.

Knowing what you do not know is a sign of wisdom, according to Greek philosopher Socrates. In all of the six previous habits of highly effective intercultural communicators there is an underlying attitude of curiosity and a passion for learning. No matter how long they have worked with people, effective intercultural communicators never pretend to know everything. They candidly acknowledge that there is always more to learn about others, regardless of the cultural or professional background they come from.

How Do You Measure Up?

If you are working within an intercultural or international business context, how do you rate yourself on each of these seven habits? If your score is low, I recommend you take more risks. The good news about taking communication risks, unlike actually walking on a tightrope, is that you can’t fall off and hurt yourself. So accept the challenge and begin practicing to become a better intercultural communicator today. I invite you to start here.